Behavior Change, Purpose - Intention - Choice, Why do I do what I do? 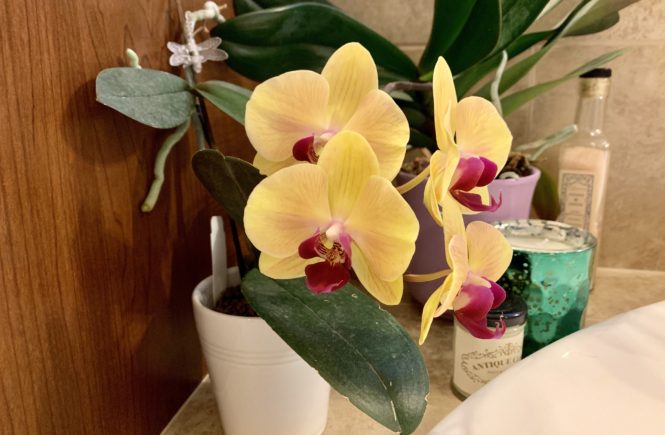 I have this orchid plant next to my bathtub, in hopes that that location might be slightly higher in humidity than the rest of the house (Relative humidity in Colorado does not support tropical plants). Anyway, I’ve had this plant for years. I bought it when it was blooming, enjoyed the blooms and then spent several years looking at it with scorn because it was not blooming. My husband would tease me about ‘my under-performing plant’, asking why I bothered to water it.

I’ll be honest, I’d pretty much written it off as simply an oxygen producer and nothing more. I felt slightly let down and a bit embarrassed that I could not get it to bloom or bother to figure out what it needed to bloom. And then guess what… I’m sure you can guess if you’ve seen the picture posted with this blog. It bloomed, not only did it bloom, it currently has four huge, bright, glorious blooms in the dead of winter.

While thinking in the shower, where all great thinking occurs, I had a real ‘a-ah’ moment. The orchid was going to bloom in its own damn time, regardless of my feelings negative or positive. I did support it, in the fact that I kept watering it, but that was it, minimal support. Over the years I’ve put in an absurd about of thought and judgement about this silly plant… and it could not care less.

The a-ah for me was really more of a ‘duh, I’m guilty of believing that I could influence the blooming of the plant, because that is what I wanted to happen’. I see this all the time with my coaching clients, they’ve been hounded, often for decades, by ‘concerned’ family and friends to lose weight, get in shape, do this or do that. Often these clients have tried so hard to do what everyone else has told them they should do, they have tried so hard to bloom for someone else, but time and again they fail to achieve what someone else wants for them. That cycle of criticism, effort and failure is exceptionally painful and paralyzing for people.

So for everyone out there who is worried about a family members weight, physical fitness, bad relationships, etc. you can support, you can ‘water’ but that person is going to bloom in their own damn time. People make lasting change for their own reasons, not yours. Wishing, wanting, demanding, bribing, cajoling, cheerleading may feel like support but frankly it is just an arrogant expression of believing that you can influence the path of another, because that path would serve you. I know that sounds harsh, and I’m guessing many people would bluster and claim ‘I’m doing it because I love them’, and likely that does play a role, but if you want to support someone making a change in their life help them discover their own reasons for doing it, not yours.

This discovery process is one of the things I like most about coaching. Helping people discover their own reasons for making a change, doing something differently, or just experimenting with new things. We have an epidemic of people who have lost their autonomy and are shocked at its power when they rediscover it.

For those people who are struggling, who are being hounded to make a change, you will bloom in your own damn time, and you get to choose what that bloom looks like. Have courage and remember you are in charge and it is your decision what happens next in your life, be the orchid, forget what everyone else wants and decide what you want. Then make it happen!

Purpose - Intention - Choice, Why do I do what I do? 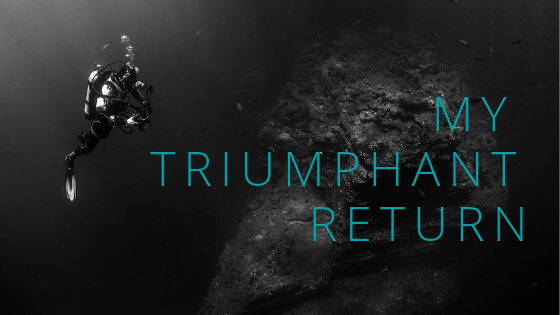 Wow does that sound cocky. A return implies that I went somewhere. A triumphant return implies that I’ve overcome something… and in both things are true. And while no one might have noticed, I certainly did and I’m excited to be back. In the summer of 2017 I became really disillusioned with my new career path. I started to feel like being a coach was equivalent to being a life insurance sales man (think Ned Ryerson in the movie Groundhog Day). Every coach I met, promised to help me achieve my goals by applying their secret sauce… and I believed several of them… and guess what the secret sauce was bullshit. At the same time I was working with a client, who I knew in my heart of hearts was not a good candidate for the type of coaching I do… but I was so excited to practice my craft. I ignored my gut feeling that said… Julie you cannot successfully coach this person, what she expects from coaching is not what you deliver. And you won’t be shocked to discover that it was not a successful coaching relationship, and it made me feel like the charlatans who kept promising me the secret sauce. Which made me feel ‘lower than whale shit’ (a famous phrase of my father’s) And as these things tend to go I went down a rabbit hole of feeling like coaching was only for the affluent and beyond the reach of regular people, which made me feel like shit as well.

So what did I do? I pulled back. I withdrew from all the ‘professional guides’ I’d assembled. I stopped all my social media activity, I stopped much of my so called networking and I did a lot of soul searching. I am really passionate about this work, and I knew I needed to find a path that would allow me to share my talents and genuinely help a variety of people, while separating myself from the cons which apparently abound in this profession.

In the fall of 2017 I started working as a Wellness Coach at a company in Loveland Colorado. I only worked there a few hours a week but what it gave me was a lifeline. I was able to work with a huge range of people, men and women, executives and admin assistants, and everyone in-between. I was able to work with people who all want to improve their lives in different ways. I worked with people who were willing to face major life challenges and push forward, choosing to believe in themselves, and work on themselves in spite of everything. The experience of coaching in this environment restored my faith in this avocation. I could see that I am one hell of a good coach, and I don’t and never have offered a secret sauce. What I offer is an unwavering belief in the capacity of my clients to achieve their goals. I continue to work at this company and honestly coming out of those sessions is pure joy! The metamorphosis that I’ve witnessed in a number if my clients is truly awe inspiring. They often thank me for my help, when in truth they’ve done all the work, and I want to thank them for restoring my faith.

2018 was spent getting my bearings, getting grounded and designing a path forward. So 2019 is the year of my Triumphant Return. It is not cocky it’s just what is true for me. I have some big plans that I look forward to sharing with the world. I’m back baby… and I’m not going anywhere!

Purpose - Intention - Choice, Why do I do what I do?

A lesson in honoring choice

As a Certified Health and Wellness Coach one of my core philosophical beliefs is that people can attain their desired level of wellness when they make choices with intention and purpose. This philosophy came into my life at a very young age and I credit one event with planting the seed.

I was a Girl Scout, and around the age of 10 my Troop was working on our various merit badges, one of which (I have no idea which one) brought us to a retirement community in Boulder Colorado to spend time with the elderly residents. We were each assigned a resident and a nurse walked us to their rooms. As I walked down the hall the nurse grabbed my shoulder and said “Mr. Smith has diabetes, and cannot eat any sugar. If he asks you to go down the hall to buy him a candy bar, you must say no. Because if he eats that candy bar he will get VERY SICK!” I had no idea what diabetes was at that time, but her warning scared the hell out of me.

I can remember his room, his deeply lined face, and his soft kind eyes. He was 89, and wheelchair bound. He had been a hard working farmer his whole life on the eastern plains of Colorado. In many ways he was like my grandfathers and it was easy to talk to him. We talked about school… did I like it? No. I liked to swim and play with my dog.

After a little while he very casually asked me if I wanted a candy bar. AND I went on full alert. I was ready. I was not going to buy him a candy bar, and make him sick. I had a job, and the nurse had entrusted me with that solemn duty. I politely said ‘No thank you’ hoping that he would let it drop. I must have had panic written all over my face. He got this mischievous little smile and said ‘well I’m going to have one.’ He rolled over to his dresser, which I was sitting next to and opened the bottom drawer.  Tucked underneath an old jacket was a treasure trove of candy. Full sized candy bars, shining in their brightly colored wrappers. Like any kid of 10 I was astounded by this collection, but the rule follower in me quickly kicked in and I said. “You are not supposed to have candy, where did this all come from?” And he laughed, not a mean derisive laugh but a laugh of true enjoyment. He said “Sweetheart, I’m 89 years old and I love candy. It is one of the few joys I have left, and so I choose to eat it. My son brings it to me, because he knows I would rather enjoy my days than live to be 100 but totally miserable.” I told him I was worried it would make him sick, and the nurse had told me not to let him eat candy. I was upset and confused. And he took my hand and said. “Sweetheart this is not your responsibility. You are not responsible for other people’s choices. We are only responsible for our own choices. I choose to eat candy, knowing it might make me sick.”

It is amazing how frequently I think of this man. A profound lesson taught with kindness and for that I’m deeply grateful. It took me years to understand the importance of this conversation, and how deeply  it would influence my life. We are always at choice whether we choose to recognize that power or not. We are solely responsible for our choices, and no matter what we are making choices why not give ourselves the gift of making those choices with purpose and intention.